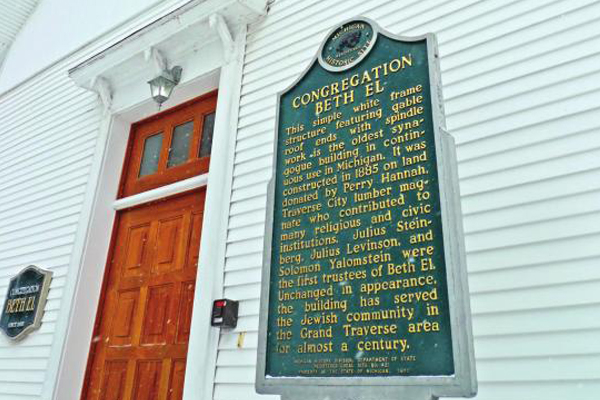 “This simple white frame structure featuring gable roof ends with spindle work is the oldest synagogue building in continuous use in Michigan. It was constructed on land donated by Perry Hannah, Traverse City lumber magnate who contributed to many religious and civic institutions. Julius Steinberg, Julius Levinson, and Solomon Yalomstein were the first trustees of Beth El. Unchanged in appearance, the building has served the Grand Traverse area for almost a century.”

In 1885, Congregation Beth El in Traverse City was formed. Traverse City’s early Jewish settlers came from Eastern Europe, largely from Russia and Poland. This small but devout group of Jewish settlers, drew up articles of incorporation to establish a “Hebrew congregation” and build a synagogue.

Julius Steinberg, Julius Levinson, and Solomon Yalomstein were among the founding trustees.

It is believed that Julius and Bertha Levinson were the earliest Jewish settlers in the Traverse City area. They settled in Surdenburg (present day Suttons Bay) and came to Traverse City in about 1880. In 1884 Julius Steinberg, who owned Traverse City’s most elegant theater, purchased five acres of land for Congregation Beth El as a cemetery for its members. A year later, in 1885 on land donated by Perry Hannah, a Traverse City lumber magnate, the synagogue was constructed. This simple white frame structure, located on South Park Street, featuring gable roof ends with spindle work is the oldest remaining synagogue in Michigan still in continuous use by Jewish worshipers.  Looking today as it did more than a century ago (except for an addition on the back allowing for handicap access) the building continues to serve the Grand Traverse area Jewish community. Today they have a membership of about 75 families.