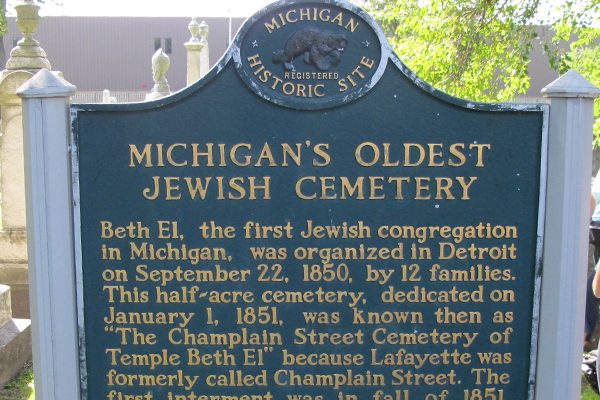 “Beth El, the first Jewish Congregation in Michigan, was organized in Detroit on September 22, 1850, by 12 families.  This half-acre cemetery, dedicated on January 1851, was known then as “The Champlain Street Cemetery of Temple Beth El” because Lafayette was formerly Champlain Street.  The first interment was in fall of 1851, and in 1854 Samuel Marcus, the first rabbi of Beth El, was buried here.  The cemetery, containing many graves of Jewish war veterans, was in active use until the 1950s.”

As obligated by Jewish law, one of the first things an organized Jewish community must do is purchase land to bury the dead. The Bet El (House of God) Society, Michigan’s first Jewish congregation (known today as Temple Beth El) paid $150 to purchase one-half acre on Champlain Street (now Lafayette Street) in Detroit in 1851. At the time, the land lay beyond the city and it abutted Detroit’s Elmwood Cemetery (founded in 1846). The first burial in the Champlain Street Cemetery was Sarah Silberman, who died in 1851. Elmwood Cemetery soon acquired the land, adding it to its 40 acres. Elmwood holds the distinction of being the oldest non-denominational burial ground in Michigan and the first integrated cemetery in the Midwest.  Over time, the lush, park-like grounds (indicative of Detroit's natural landscape) became the final resting place for some of Detroit’s most notable leaders and recognizable names, including Rabbi Marcus (who died in the 1854 cholera epidemic) and Edward Kanter (a polyglot who helped found Detroit's German-American bank).  Today Elmwood encompasses more than 80 acres, including the Champalin Street Cemetery.

Being small in size, the Champlain Street Cemetery was not conducive to family plots and could not meet the long-term needs of the congregation. In 1873 Temple Beth El purchased Section North F in Detroit's Woodmere Cemetery. The last burial at Champlain Street--the first Jewish burial in nearly 30 years--occurred in 2011.