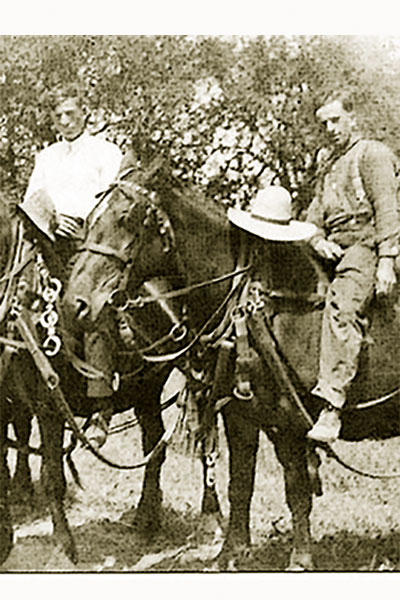 In 1882, Lazarus Silberman, a Chicago banker, helped settle twelve families in Emmet County, Michigan, about six miles south of the Mackinac Straits.  Believed to be the first Jewish farming settlement in the state of Michigan, the community was part of a small, but growing, national trend of Jewish farming communities. The Emmet County farming colony lasted only a few short years but in the soil-rich Midwest, other farming settlements and colonies had begun to take shape.  In 1891, an enterprising man by the name of Hyman Lewenberg decided to launch a Jewish faming colony near Bad Axe in Michigan’s thumb.  Several bankers who owned vast stretches of land agreed to sell Lewenberg the acreage on easy terms, provided he could gather a large group of Jewish purchasers.

Ultimately, twelve adjoining parcels of land were purchased by a group of Jewish settlers, all peddlers or itinerants who were inexperienced in farming, but who shared the vision of creating a “new Zion” in the land of the free. They called their colony Palestine.

Getting the land was the easy part.  Establishing the farms was anything but.  The first winter, in 1891-1892, many of the colonists were forced to leave their crude housing for better conditions in Bay City. Those who remained, penniless for the most part, received food and money from family members.  Their plight came to the attention of Martin Butzel, a prominent Detroit merchant.  Butzel called upon his friend, a decorated Civil War veteran, Emanuel Wodic to help create a path for success for the Palestine farmers.

Through Butzel, funds were raised.  Wodic stepped in as a sort of project manager and helped purchase feed and equipment and taught farming classes to the colonists, many of whom had only known peddling as a career.

Yet, for all of the efforts that went into the project, the farm yield never was enough to pay down the accumulating debt.  In 1899, three colonists simply gave up and abandoned their farms.  A year later, only eight remained – down from a high of sixteen.  The land reverted back to the original sellers and the experiment was abandoned.