In the early 1900s, many enterprising Jewish Detroit individuals ventured into various aspects of the motor car business during its infancy. Several Jewish entrepreneurs were integral to the development of the auto parts and supply industry, yet few took the plunge into actually manufacturing automobiles. Hyman Louis (“H.L.”) Goldman was among the handful of exceptions.

The eldest of five surviving siblings, H.L. was born in March 1858 in Kaunas, Lithuania to Harris Yopkovitch and Hannah Freiberg. He married Ethel “Hattie” Goldman in 1880 in Poland, and the couple adopted Goldman as their surname from that point forward. They immediately crossed the Atlantic and headed west to settle in Detroit.

Working briefly as a junk peddler, H.L. founded the Riverside Machinery Company in 1882. Shortly thereafter, he established the Riverside Scrap Iron and Metal Company at the intersection of St. Aubin and Atwater Streets adjacent to the Detroit River. Despite substantial competition in the scrap trade, H.L.’s business proficiency and energetic nature assured his success.

Affluent in fewer than a decade in Detroit, H.L. provided a comfortable life for Ethel and their six children, born between 1882 and 1894: Louis, Abe, Harry, Anna, Dora, and Ray. In 1888, H.L. arranged for and funded the passage of his parents and four siblings – Samuel, Alexander, Sarah, and David – all of whom changed their name from Yopkovitch to Goldman. H.L. rented a large home for them and provided employment in one of his many enterprises for Sam, then 25 years old.

Throughout the years, the Goldmans were extensively involved in many of the organizations instituted in response to the mounting needs of a growing Detroit Jewish community. The family assisted with the organization and underwriting of youth sports activities at the Orthodox synagogue, Shaarey Zedek. In 1919, H.L. and other like-minded Jewish community leaders created the United Hebrew Schools. When United Jewish Charities, the forerunner of today’s Jewish Federation of Metropolitan Detroit, was formed in 1899, the Goldmans were a part of it. H.L. also maintained membership in numerous non-sectarian civic, social, and charitable groups such as the Knights of Pythias and the Odd Fellows.

H.L.’s ownership of marine-motor, machinery and scrap-metal businesses provided him the experience to venture into automobile manufacturing. Around 1903, with his three sons, H.L. purchased the assets of the Reliance Motor Company and the Marvel Motor Company, and created the Crescent Motor Company, setting up the plant just southeast of the Mt. Elliot Cemetery.

With Henry Ford’s former head mechanic Charles Wain as superintendent, Crescent initially produced the Marvel, a two-cylinder roadster with the engine hidden up front under a hood. H.L. soon acquired the Benham Motor Company, adding the Benham model to Crescent’s manufacturing. Both models were exhibited in early automobile shows at the old Light Guard Armory, then located at East Congress and Brush Street. H.L.’s son Abe tested the cars on Belle Isle, sometimes receiving a speeding ticket for going 20 miles per hour, five over the limit of 15. The Reliance, a large touring model with a covered top, was later added to the line-up, but the sporty Marvel, at $800, was the most popular Crescent vehicle. 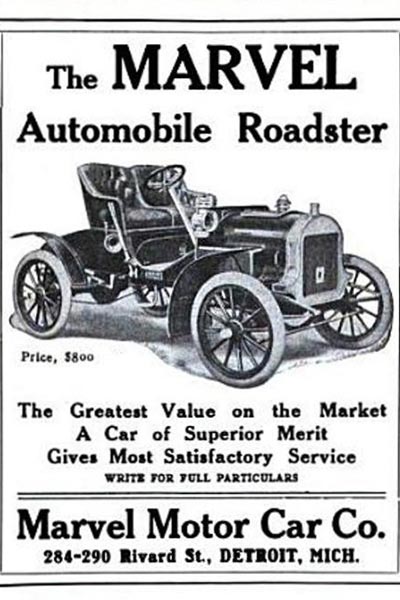 In 1908, H.L. sold the Crescent Motor Company to William Durant, who acquired 16 other firms to form General Motors Corporation.

Hyman Louis Yopkovitch Goldman died at age 73 on August 6, 1931, in Detroit. He was buried beside his wife and parents in the Goldman plot at Machpelah Cemetery on Woodward Avenue in Ferndale.