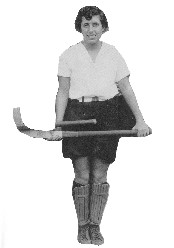 It may be hard to imagine now, but it’s only within the past four decades, since the 1972 passage of Title IX, which mandated equality in federally-funded athletics programs, that women have participated seriously in school, college, and professional sports. Before that, it was somewhat unusual for women to play sports at all, with the exception of limited opportunities for affluent women to play tennis or golf.

Because of this, the documented contributions of early women athletes are elusive. Miriam Edwards Kushner, thankfully, is an exception. Born in Detroit, Kushner attended Detroit's Central High School where she was all-city in basketball, field hockey, and tennis. An athlete at heart, this talented woman went on to major in piano at Wayne State University and became a distinguished concert pianist. She played at Detroit's stellar Book Cadillac Hotel, and served as pianist for radio station WXYZ from 1928 to 1930. Later, she and her husband, Aid Kushner, were instrumental in starting the Leo M. Franklin Archives at Temple Beth El. They served as volunteer archivists from 1984 until a professional archivist was hired in 1998.