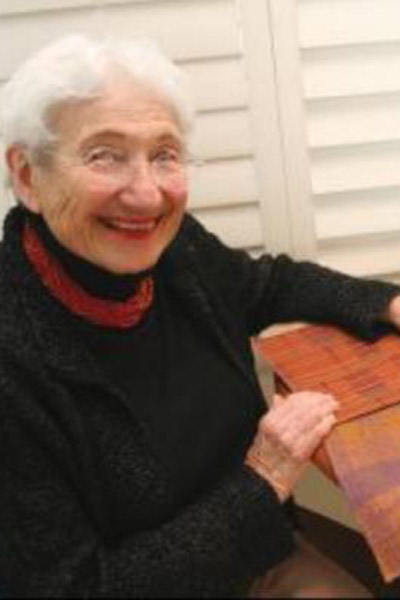 For a woman whose true desire was to become an architect, Ruth Adler Schnee has done exceptionally well as a pioneer of mid-century modern print design.

The Adler family, including the teenaged Ruth, escaped Nazi Germany in the late 1930s and settled in Detroit. Ruth graduated from the Rhode Island School of Design in 1945, worked in the New York office of renowned industrial designer Raymond Loewy and subsequently was the first woman to earn a graduate degree in architecture from the Cranbrook Academy of Art, studying under Eliel Saarinen. But in the mid-1940s, no architectural firm would hire a woman.  “We don’t want a beauty shop,” she was told at one Detroit firm.

When she couldn’t find appropriate fabric patterns to match the sleek home she designed for a 1946 Chicago Tribune contest, she created her own. Winning the contest, she also attracted the attention of a Chicago architectural firm that decided her designs were just what they needed for their automobile showrooms. That was the catalyst for the pioneering textile designer who is now best known for her bold, colorful abstract designs.

In 1947, while an instructor at Lawrence Institute of Technology, Schnee opened her own design studio. Later, with husband Edward Schnee, she established a retail store in the Harmonie Park area of Detroit featuring avant-garde home furnishings.  Her designs were immediately favored by leading architects, including Frank Lloyd Wright, Minoru Yamasaki and Paul Rudolf, who needed appropriate textiles for their modernist buildings. Her designs also appealed to furniture manufacturers like Knoll. In 2015, she signed a 20-year contract with Knoll, at the age of 91.

In 2010, Ruth Adler Schnee received an honorary doctorate from the Center for Creative Studies in Detroit. In 2011, she showcased a solo exhibition at the Venice Biennale in Venice and in 2012 at the Smithsonian. She was honored with the Kresge Eminent Artist Award in 2015 for her lifelong professional achievements and contributions to Detroit’s cultural community.

“As a Jewish immigrant who escaped Nazi Germany and launched an influential business in Detroit, as a woman who broke through barriers in a male-dominated field, as a Detroiter who helped shape an international sensibility, her story speaks to the value of inclusiveness, to the entrepreneurial spirit and to the profound role the arts play in nurturing our souls.”