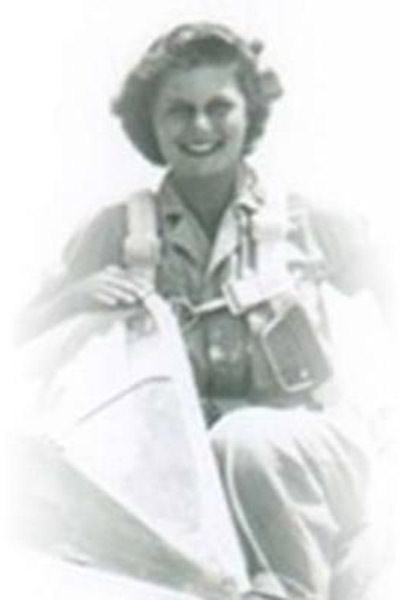 WWII pilot with a love of flying and family

From the age of 10, Sylvia Schwartz Granader developed a love of planes, watching them depart and land from her aunt’s Detroit coffee shop across from City Airport. In her senior year as an art major at Wayne University, she got her chance to fly, when she was one of only two women to be accepted into the Civil Air Patrol Program and got her pilot’s license in 1941. “I was under 21 and wanted to join,” she said in a 2009 documentary. “I needed a parent’s signature and my mother refused. My father asked me if I really wanted to do it, and I said yes, so he agreed to sign. My mother didn’t talk to either one of us for three months.”

Sylvia then taught art in public schools and aeronautical engineering at Wayne University until she had accumulated the 75 solo flying hours necessary to be accepted into the Women Airforce Service Pilots (WASP) program in 1943. She received her training in Sweetwater, Texas (two months primary training, two months basic training, and two months advanced training) before being sent to a base in Wilmington, Delaware.

“They had a base near Detroit, but I knew my mother would be at the field every day, so I chose Wilmington,” Sylvia said. Subsequently, she was stationed at Waco, Texas and assigned to towing planes as targets, which were shot at by sailors on offshore boats as part of target practice. Because the sailors used live ammunition, this was a risky undertaking for the pilots; four members of her group were killed during that time from bullets that hit their planes instead of the targets.

At that time, women received the same training as male Army pilots and got their wings, but no rank and no pay. As the WASPs were not considered a branch of the military, there were no survivor benefits and no death expenses. When a female colleague was killed, the WASPs passed the hat to return the fallen woman’s body back to her family.

Sylvia married Harry Granader, whom she had met while in the Civil Air Patrol, in 1943 and raised five sons. She and Harry were founding members of Congregation Beth Shalom in Oak Park, Michigan. In 1959, Sylvia received her MFA in Weaving at Cranbrook Academy of Art. In the 1980s, the Granaders purchased a ranch in Gold Creek, Montana and donated 87 acres to found Camp Make-a-Dream, a cost-free camp for children whose lives have been touched by cancer. The camp opened its doors in 1991 and has grown every year. In 2010, at the age of 90, Sylvia took her final flight when she flew to Washington, D.C. to be awarded the Congressional Gold Medal by President Barack Obama.