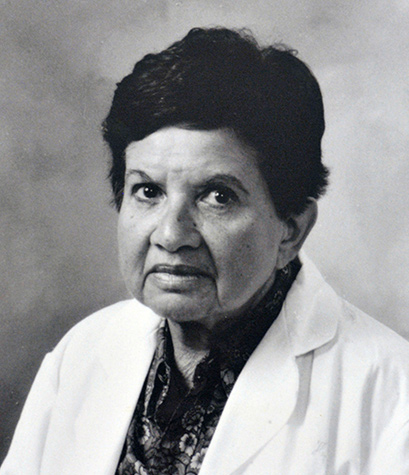 Respected educator a pioneer in the field of pediatric immunology

Born in Calcutta, India, Dr. Flossie Cohen was one of six women in her graduating class at the University of Buffalo School of Medicine in 1950. After completing a residency in pediatrics at the Jewish Hospital of Brooklyn, Dr. Cohen moved to Detroit in 1953 to study with Dr. Wolf W. Zuelzer during a fellowship at Children’s Hospital of Michigan. She spent most of her career there, studying pediatric immunology and the passage of red blood cells between fetuses and their mothers.

In 1972, she co-authored a landmark paper on Severe Combined Immuno-Deficiency (SCID) and ADA deficiency that showed, for the first time, a biochemical basis for a primary immune-deficiency disease. A few years later, in 1975, Dr. Cohen performed the first successful pediatric bone marrow transplant in Michigan, taking healthy bone marrow from the brother of an infant with severe immune deficiency. She was also the first physician to fluoresce red blood cells, a now routine procedure.

With the advent of AIDS, she focused her attentions toward women and children afflicted with the disease. She created Children’s Hospital’s Pediatric HIV Clinic in 1985, one of many advances she made which lead to the 1991 contract with the National Institutes of Health for perinatal and pediatric AIDS clinical trials; work which continues to this day under the Michigan Maternal-Infant HIV Center, at Children’s Hospital of Michigan.

In addition to her clinical and administrative work, Flossie Cohen was a professor emeritus at Wayne State University. She received numerous awards, including the WSU Lawrence M. Weiner Award. That award, established in 1979, honors the outstanding contributions made by individuals who are not M.D. alumni of the WSU School of Medicine. The award is based on exceptional performance of the recipient’s teaching, research and/or administrative duties.

Dr. Flossie Cohen was inducted into the Michigan Women’s Hall of Fame in 1994, who cited her as being “a forceful educator who was highly respected by her colleagues, her staff, and her associates… who earned every feature of distinction that would serve as a model for other women and for humanity.”