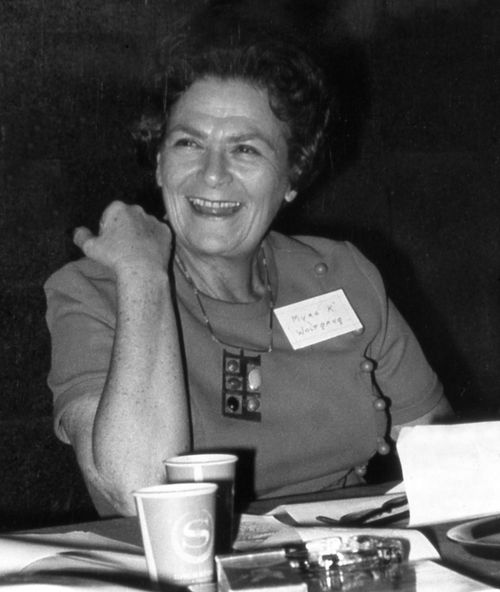 Myra Komoroff Wolfgang was one of the nation’s first women union organizers. Brought to Detroit as a baby by her Eastern European-born parents, by age 23, she was leading strikes and directing organizing drives in Detroit’s hotels and restaurants.

After a career that began out of necessity, and as a secretary, in 1937, she walked into a Woolworth’s department store at Woodward and Grand River and blew a whistle. This was a pre-arranged signal to the women behind the counters, and resulted in a pink-collar, sit-down strike lasting eight days. The strike generated nationwide publicity, including a story in Life magazine.

Myra rose to become an international vice president of her union, and was a go-to authority on wages, hours and women in the workforce. Hard bargaining and strategic strikes won significant benefits for union members. In the 30s, a waitress might earn $6 a week. By 1960, the union pay scale had risen to $66 a week, with benefits like a pension plan, and health, accident and life insurance. As a member of Michigan’s Wage Deviation Board and the Wayne County AFL-CIO executive board, Myra campaigned for a higher minimum wage, efforts which were ultimately successful.

Myra used her publicity and prestige on behalf of her members and all low-wage earners. “So long as one bean picker in Western Michigan or one bus boy on Woodward Avenue is getting a short deal, Mrs. Wolfgang is ready for the picket line or for an appearance before a legislative committee,” said Edwin A. Leahy, Chief of the Detroit Free Press’ Washington Bureau in 1966.

Myra was one of the founders of the Coalition of Labor Union Women, formed to help women become union leaders and give their issues greater weight during contract talks. She was presiding officer at the CLUW’s first conference, which attracted more than 3,000 women from 82 unions.