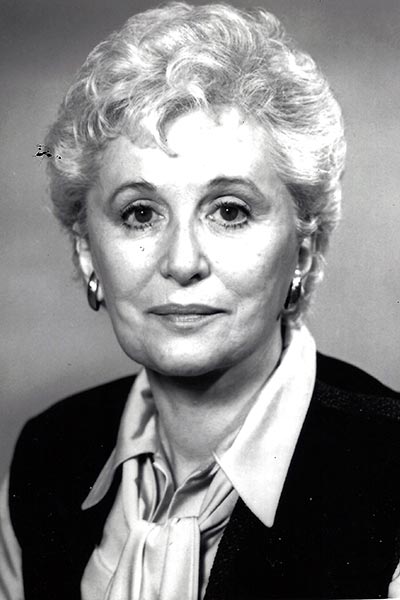 Esther Shapiro led a life of effective contributions to civil rights, voting rights and consumer rights, all of which have had significant positive local, state and national impact.

She was born Esther Karson in 1918 in Chicago, where her parents, both Jewish immigrants, ran a small grocery store. As a young woman, Esther moved to New York City, where she met her future husband, union organizer Harold (Hal) Shapiro, as she stood among striking workers at a sweat shop fighting for better working conditions. She and Hal married in 1940. During WWII, the couple moved to Vancouver, Washington, to work in the shipyards for the war effort.  The couple challenged racial discrimination by inviting racially mixed groups of friends into their home. Their daughter, Andrea, was born during that time.

In 1944, the couple moved to Detroit, where Hal became the Midwest organizer of the International Fur & Leather Workers’ Union, and where their son, Mark, was born.  All the while, Esther was at Hal’s side organizing and working with her neighbors to maintain integration in the Cub Scouts and in her local public school.  Later, she worked for the Detroit Public Schools in President Johnson’s War on Poverty Volunteer Training Program. She then became the first consumer education specialist at the Michigan Credit Union League, a statewide organization serving more than one million credit union families, developing educational programs and speaking to groups throughout the State. Esther’s goal was to give consumers a better understanding of their rights – and their responsibilities. Her mantra was “read the label,” and it applied to everyone, whether someone about to sign a contract, a shopper examining a can of food for purchase, or a voter filling out a ballot.

In addition to her expertise as a consumer watchdog, Esther was at the forefront of getting support for voting rights and civil rights. She was adamant about encouraging voters to learn everything they could about a politician or ballot issue before entering the voting booth. She worked in the campaign offices of Congressman John Conyers and Congressman George Crockett, and was an early supporter of the Rev. Dr. Martin Luther King Jr. through the Michigan Friends of the South – a Detroit women’s group that raised funds for the civil rights activities of Dr. King and the Freedom Marchers. Dr. King acknowledged her work in meeting with Esther and the group when he visited Detroit in the 1960s.

Throughout her life, Esther served the Detroit community, the state of Michigan, and in the national arena in many roles. She was the founding director of the City of Detroit Department of Consumer Affairs, serving from 1974 to 1990. During her tenure there, she hosted a popular weekly WWJ-AM radio show and wrote a weekly Detroit Free Press column, through which she answered consumer questions and offered consumer advice.

Harriet Saperstein remembers Esther as a neighbor, friend, and role model, who grew up with values typical of an immigrant Jewish family, honoring the Jewish heritage of social activism.

“As I remember Esther, I think her actions and her spirit have helped create a more equal and just society,” Saperstein said. “Her words were her tools, her actions were her bullets, her target was social injustice, and she did not, and would not, ever give up.”

Esther’s efforts were recognized through her election to a variety of national consumer advocacy and protection boards, including president of the Consumer Federation of America. She was the first non-lawyer to achieve the State Bar of Michigan’s Frank Kelly Consumer Award. The Detroit Urban League recognized the civil rights advocacy of Esther and Hal Shapiro with a Distinguished Warrior Award. The Society of Consumer Affairs Professionals in Business named its annual award after Esther, now given to those who share her visionary leadership and ethical standards in consumer affairs. She received the Anti-Defamation League’s Lifetime Achievement Award in 2000, and was inducted into the Michigan Women’s Hall of Fame in 2015.

Esther died in 2016 at age 98, but is remembered by friends such as Bill Laitner of the Detroit Free Press, as a “warm, motherly type of city official – but a well-mannered pit bull about enforcing consumer laws.”  Her legacy has been carried on through the social activism of her children and grandchildren.