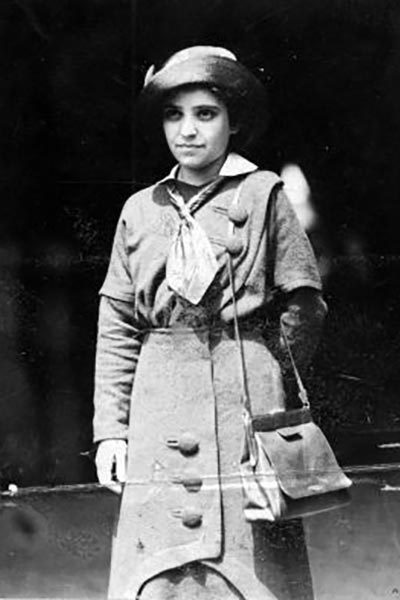 In 1913, Matilda Rabinowitz, who later changed her name to Matilda Robbins, stood on a soap box and passionately spoke to Ford Motor Company workers about industrial unionism. Arrested and later released, Matilda would go on to become one of the first women leaders in labor, and a Michigan Woman Who Made a Difference.

Matilda Rabinowitz’s strong-willed dedication to industrial unionism may have been forged by both her origins and her family. She was named Taube Gitel Rabinowitz in Litin, a Russian Ukraine town of 10,000 where Jews made up 41 per cent of the population. Her father, Jacob, was a rabbinical scholar who read both Yiddish and Hebrew, and her mother was observant and kept a kosher home. Under the czarist regime, Jews were barred from civil service and many professions. Jacob, a retail beer dealer, slipped out of Russia in 1895 when Matilda was eight years old. He made his way to London, then New York, where he earned enough money as a metalworker to send for his wife and five children. On Dec. 25, 1900, after a difficult passage, they were reunited.

Less than five feet tall and weighing only 112 pounds, this Jewish immigrant, whom the Detroit media described as “the young Russian beauty,” came to America at the age of 13, the eldest of her four siblings (two more would be born in the U.S.). She learned English, and got her first job at age 14, clipping threads off finished shirtwaists, working ten-hour days and half-days on Saturdays for $2.50 a week.

After the family moved to Connecticut, Matilda and her brother David joined the Socialist Party. It was there she became active with the Industrial Workers of the World (I.W.W.), volunteering in the 1912 “Bread and Roses” strike of women garment workers in Lawrence, Mass., and in Little Falls, NY. Her work in that successful strike led the I.W.W. to hire her. She and fellow I.W.W. organizer Elizabeth Gurley Flynn became among the first of the union’s women organizers. Matilda was the union’s version of a traveling salesperson, constantly on the road to southern textile mills, to plants in Ohio and Pennsylvania, and to Detroit, whenever and wherever there were signs of labor struggles. “Fan the flames of discontent,” the I.W.W. said on the cover of its Little Red Song Book, and that became Matilda’s calling. 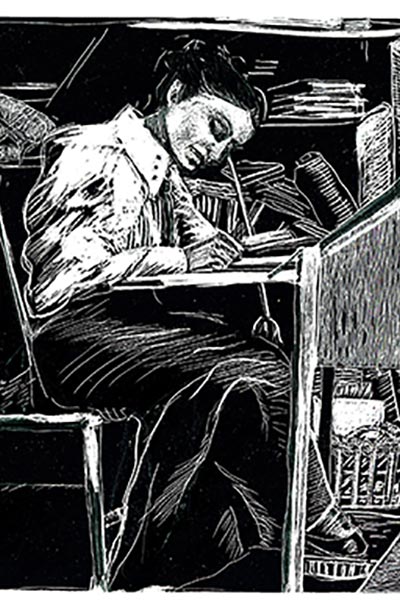 Fiercely anti-capitalist, the I.W.W. took the position that “the employing class and working class have nothing in common.” Matilda and other I.W.W. organizers became increasingly active in Michigan in 1913 as labor troubles were happening on several fronts: 10,000 railroad workers were taking a strike vote, Detroit firefighters had gone to arbitration to win a raise, and the city’s kosher bakers, who served 25,000 Jewish families in Detroit, were on strike against ten bakeries to demand an eight-hour workday.

With some 60,000 men employed at Ford, Studebaker, Packard, and other auto companies in 1913, Detroit was well on the road to becoming the nation’s motor city. Skilled workers like metal polishers and pattern makers were represented by the craft unions affiliated with the American Federation of Labor, but many workers had no union, and were seen by the I.W.W. as ripe for organizing.

At Ford Motor Company, most workers earned no more than $2.34 for a nine-hour workday; Henry Ford would not announce his $5/day plan until the following year. Matilda, who had been organizing for the I.W.W. in the East and South, and who could speak to workers in English, Russian, and Polish, was assigned to Detroit to help reach workers through the I.W.W. Automobile Workers Industrial Union Local 16. With workers gathered around on their lunch break, Matilda would literally mount a soap box outside the Ford plant and other auto factories, passionately voicing her mission about industrial unionism and encouraging workers to join the “great industrial band” of the I.W.W. On April 28, 1913, Highland Park police arrested Matilda while she was speaking on Manchester Street east of Woodward Avenue, next to the Ford factory.

Getting arrested was a nuisance, Matilda felt, but was a small price to pay for trying to reach workers in what she called the “pious precinct of Highland Park.” Arrests often ended with no charges filed. “The idea was to keep us off Mr. Ford’s sacred property and away from the factory gates,” she wrote. “So, they just locked us up for the night for safekeeping.”

Seven weeks after Matilda was arrested in Highland Park, and after leaving town for I.W.W. speaking duties in Pittsburgh, Matilda returned to Detroit to take part in the Studebaker auto employees’ strike. On June 17, an estimated 3,500 workers left their jobs at the company’s plant at the corner of West Jefferson Avenue and Clark Street on Detroit’s west side. Workers marched seven miles to a second Studebaker plant that occupied the old Ford Model T factory at Piquette Avenue and Brush Street. From there, they marched to a third Studebaker factory at Franklin and St. Aubin streets, near the Detroit riverfront.

By June 20, hundreds had taken their fight to the Packard Motor Car Co. plant on East Grand Boulevard, where they were attacked by seven mounted police officers and patrolmen wielding clubs. Matilda plunged into the Studebaker walkout. “There were never enough organizers, and women organizers were still a novelty,” she wrote. As at Ford, she faced police efforts to keep her from speaking. “We were pulled off soap boxes and jailed just long enough to disrupt meetings,” she wrote. “All cases were dismissed.”

When Studebaker announced a policy to appease workers’ complaints about bi-weekly paydays, the strike dwindled, and most men returned to their jobs. Matilda left Detroit shortly thereafter, and never returned. In January 1914, Ford announced the $5/day pay plan that doubled the prevailing wage and led thousands of workers to line up for jobs.

The I.W.W. would not gain a foothold in the auto industry during those years, but the agitation by Matilda Rabinowitz and other I.W.W. organizers for one big union “proved to the union movement that both skilled and unskilled workers in one industry could work together in one union to fight the boss,” asserted the I.W.W. years later.

Matilda gave birth to a daughter, Vita, in 1919, and sometime around 1921, the entire family changed its name from Rabinowitz to Robbins. From then on, Matilda would be known as Matilda Robbins, the name she used in her byline for the articles she frequently wrote for the I.W.W.’s newspaper, the Industrial Worker, until shortly before her death on her 76th birthday in January 1963.

In May of 2017, Matilda Robbins was inducted into Labor’s International Hall of Fame as a “feminist, fighter, writer, and organizer.” Her granddaughter, Robbin Legere Henderson, was present at the ceremony, surrounded by five I.W.W. members, each of whom she embraced as a comrade carrying on her grandmother’s legacy.

Elsila, David. “Meet Matilda Rabinowitz: A Titan in Labor History and a Michigan Woman Who Made a Difference.”  Michigan Jewish History (Fall 2017): 71-81.

Drawing by Robbin Legere Henderson shows Matilda at her desk in Little Falls, NY during her first strike. The drawing was made from a photo in the Walter P. Reuther Library of Labor and Urban Affairs collection. Robbin Henderson recalls the picture hanging on a wall near Matilda's home-office desk.