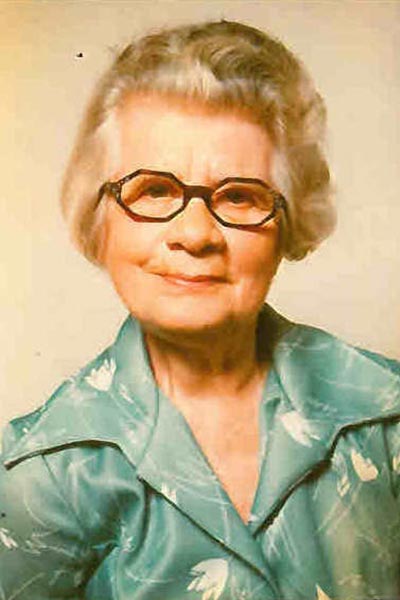 Taught multiple generations the importance of Jewish history and values

As a young girl growing up in Chicago during World War I, Rebecca (Reva) Kaufman dreamed of becoming a dentist. However, she needed the permission of her father. Baruch Dov Kaufman, was very strict and protective of his five children. His response was “girls do not become dentists.”

Soon after, Reva desired to go to Israel with others in her Jewish youth group who identified with the chalutzim movement of the 1920s, and to settle there. Again, her father refused permission.  “Become a practical nurse. Help others here at home.”  She did, receiving her certificate in practical nursing in the 1920s. She married a young man from the youth group, Morris Ragins, and worked alongside him in the deli and soda shop they owned, then a small bakery. Tragically, Morris was killed in an accident on Reva’s birthday in 1930, leaving her a young widow with a two-year-old son, Abner. She decided to join the rest of her family, who had already settled in Grand Rapids, Michigan.

In 1935, Reva married Irving (Dave) Appleton, an auto parts sales representative, and a daughter, Barbara, was born in 1938. When World War II broke out, Dave joined the U.S. Navy as a Seabee stationed in the South Pacific. Reva raised her two children and became involved in the elementary school her daughter attended, in both the PTA and as a volunteer and tutor. In 1956, at age 53, Dave died of brain cancer, and once again, Reva was alone. She combatted this loneliness by getting involved in numerous volunteer activities, including forming a “Senior Friendship Club” for other Jewish people who, like herself, were alone. For many years, she taught a Yiddish class, as that was her first tongue and she wanted to instill in teenagers an interest in the language and in Yiddish literature.

Reva lived a “Jewish” life every day. Her activities and routine were infused with the moral and ethical teachings of her parents – frequently repeating their words of guidance. For 38 years, Reva taught Sunday School and Hebrew School at Ahavas Israel. As a result, she touched the lives of several generations of children, introducing them to their history, culture, and ethical values.