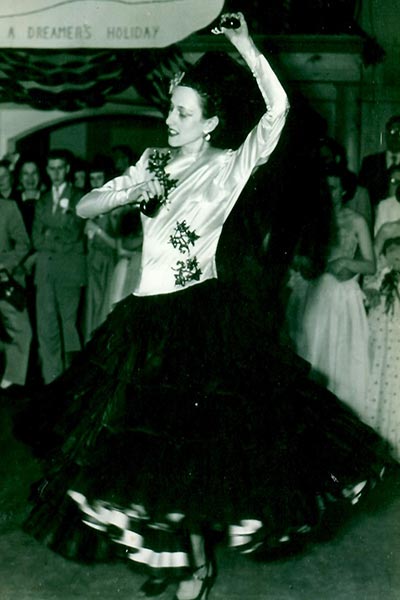 Genevieve Siegel Schoenberger, a hard-working woman of exceptional grace, beauty and generosity, felt a special affection for the communities in which she lived.  A mainstay in the cultural life of Ludington and Scottville, she is credited with bringing dance to Mason County, Michigan.

The eldest daughter of Russian immigrants Abraham and Hattie (Orwant) Siegel, Genevieve graduated from Grand Rapids Union High School in 1928 and worked as a cleaning lady and au pair to pay her way through Michigan State Normal College, now Eastern Michigan University.  Graduating in 1932, she taught school in Mt. Clemens and Grand Rapids before marriage.

Merchant Abbie Schoenberger spotted Genevieve through the window of his grocery store in Scottville when she was visiting relatives, and declared he was going to marry her.  He did, and after their wedding in 1937, they enjoyed 43 years together, raising children, Marlene, Maurice and Lana – and then delighted in knowing all six of their grandchildren.

As a cashier in the family market she knew the customers by name.  Children shopping with their parents were not surprised when Mrs. Schoenberger asked them about school, loaned them books from her personal library and then in a friendly way quizzed them when they returned the books.

Genevieve was raised in Grand Rapids by a single mother who could not pay for dance lessons. Later, as a young working woman, Genevieve paid for her younger twin sisters’ lessons, allowing them to perform as the Dolly Sisters during World War II.

For some time in the 1940s, this determined mother drove her children to dance and Jewish education classes in Grand Rapids.  When she found a qualified dance teacher to come to Ludington, Genevieve dropped the trips to Grand Rapids, and opened the carriage house in her backyard as a dance studio.

In her 40s, she began her own dance training in ballet and Spanish dance. For years she took a Greyhound bus to Detroit to study with noted teacher Theodore Smith.  She had an elegant satin Flamenco costume made to dance for her family and friends on special occasions. Her dance notes, as well as other teaching materials and memorabilia are in the Michigan Dance Archives at the Reuther Library at Wayne State University.

In addition to dance, Genevieve was a lover of nature and outdoor activities.  She helped lead campaigns to extend the boundaries of Ludington State Park.  The park was among her favorite destinations and she would often ride her bicycle there to swim or read.

As the only Jewish couple in that generation raising a family in Mason County, Genevieve was determined to provide a solid base of Jewish values to her children. She also helped their classmates and other children appreciate Jewish culture by sharing holiday celebrations and giving classroom presentations.

Committed to social justice and a lifelong learner, Genevieve was active in the American Association of University Women, and supported the United Jewish Appeal and the Southern Poverty Law Center, among other progressive causes.  She and her husband were generous supporters of countless local organizations and quietly helped many families in need.