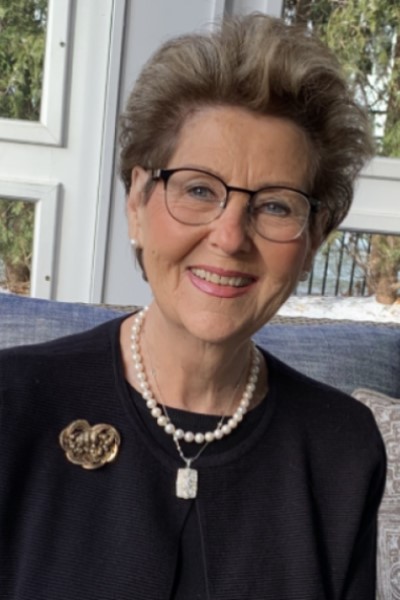 Born Heléne Winitsky on May 9, 1939 to Bertha and Israel Winitsky, Heléne and her younger brother, Ulf, grew up in Malmö, Sweden.  Heléne remembers a joyous childhood in Malmö, shared with her maternal grandparents, Rebecca and Judah Silber, of Copenhagen, and her paternal grandparents—Dora and Solomon Winitsky, of Malmö—along with loving aunts, uncles, and cousins on both sides.

Germany occupied Denmark on April 9, 1940, one month before Heléne’s first birthday.  Fearing that Sweden might face a similar fate, Heléne’s parents had a plan.  Gentile neighbors in their apartment building were designated as rescuers, though ultimately Sweden remained neutral.

In August 1943, Germany placed Denmark under direct military occupation.  On October 1, Hitler ordered Danish Jews to be arrested and deported.  Within a few weeks, over 7,200 Jews were smuggled in fishing boats over the Øresund to Sweden, avoiding deportation to Nazi concentration camps. Among them were Heléne’s grandparents and other family members.

In the late 1950s, Heléne became a certified dental assistant. A devotee of American cinema, she yearned to have a U.S. adventure and learn English.  In the summer of 1960, her parents, together with a translator, helped her make arrangements to work as an au pair with the family of Shirley and Rabbi Norman Kahn of Newburgh, New York.  Rabbi Kahn was the rabbi at a Reform congregation and a chaplain at West Point Military Academy.

Within four months, as the caretaker of three young children, Heléne discovered that her English improved dramatically.  Determined to find employment in an American dental practice, she then went to live with her great aunt in Detroit on December 31, 1961.  Heléne found employment as a dental assistant with a semi-retired dentist in the David Whitney Building, and later she worked for Dr. Jerome Krause.

Heléne met her husband Marvin through a shiduch (“set-up”) arranged by an acquaintance.  The two were married in Malmö on August 18, 1963 by Rabbi Marcus Melchior, Chief Rabbi of Denmark. Heléne and Marvin have three children and six grandchildren.

In the early 1960s, Heléne found joy in visits with Marvin’s 100-year-old uncle at McDonnel Apartments in Southfield, and later Borman Hall in Detroit. Carol Rosenberg, Program Director at Borman Hall, suggested that Heléne enroll in an eight-week training program in pastoral care for the elderly. When Fleischman Residence was built in West Bloomfield, Heléne followed and activated the ‘Nosh Nook,’ where for many years, she served lunch to the residents and employees.  Fifty-five years later, Heléne continues regular visits to elderly friends.

In the late 1970s, Heléne launched Enjoy Scandanavian!, a cooking and baking demonstration class.  With 20-40 women seated in her kitchen, Heléne was a Swedish-kosher version of Julia Child, charming her students and treating them to a buffet of the final version of everything taught.  Heléne held Passover clinics to demonstrate leaven-free recipes.  In the early 1980’s, she spent a morning teaching WXYZ-TV’s Jack McCarthy how to make Swedish coffee cake and was featured on his “Friday Feast” series.

At a Woman’s World fundraiser at Shaarey Zedek, Heléne met Lypsa Groner, the rabbi’s wife, who on the spot encouraged Heléne’s involvement in synagogue life.  She walked Heléne to the Sisterhood Kitchen and introduced her to the volunteers.  Over the years, Heléne prepared shul fare for scores of programs and has co-chaired the Kugel Mavens, a rotation of volunteers who prepare the synagogue’s weekly Kiddush luncheon.

Heléne’s volunteer life evolved on several fronts and became anchored at Shaarey Zedek, her spiritual and social home.  She was asked to chair a Woman’s World fundraiser and later served a term as Sisterhood president (1985-1987).

Heléne has been a member of the synagogue Board of Trustees, chaired the Membership Committee, chaired the Usher Committee, founded the Golden Heart Visiting Committee, served on the Program Committee, and co-chaired the Weisberg Concert. With over 25 years as Head Usher, Heléne is not only a greeter who wants people to feel at home. Her effusive warmth is an expression of her devotion to building a local community.

In 1985, Heléne opened a women’s clothing store on Northwestern Highway, called Heléne’s, and eventually pivoted from clothing sales to gown rentals, a similar pattern to the one established by her mother in Malmö.  Whether it is women’s clothing or cooking classes or a novel volunteer project, Heléne’s entrepreneurial spirit and willingness to extend herself as a leader animates and drives everything she does.

Heléne volunteered with the Jewish Hospice and Chaplaincy Network for fifteen years and looks back at these visits as the most meaningful and challenging volunteer work of her life. She completed “friendly visitor” trainings and visited clients at Bortz Health Care, Danto Health Care Center, Fleischmann Residence, American House and private homes. She served on the planning committee for the Bessie Spector Oldest Jewish Americans brunch, which celebrates community members who are age 95 and older.

Currently, Heléne volunteers at Kadima Mental Health Services, helping with programs planned in partnership with National Council of Jewish Women (NCJW). She serves as a liaison to the Oakland County Probate Court for adult guardianship cases, making site visits to adult care facilities and reporting back to the court, also through an NCJW partnership.

In her mid-70s, Heléne chaired two fundraisers for National Council of Jewish Women, featuring the plays Love, Loss and What I Wore and What Am I Doing Here? As a reader in Vagina Monologues, Heléne cracked up audiences with her animated and humorous performance.

In her latest project, “knitted knockers,” Heléne knits breast prostheses for women who have undergone mastectomies or similar procedures.  While attending a knitting class through the Cancer Thrivers Network for Jewish Women at Jewish Family Service of Metro Detroit, Heléne heard about knitted knockers and crafted over 100 within six months.  She dedicated them to Sandy Schwartz, founder of the Cancer Thrivers Network, and in early 2019, was invited onto the network’s steering committee. Through the Sisterhood at Shaarey Zedek, Heléne started to teach others how to knit the “knockers.”

“In my 55 years of being a volunteer, my life has been enriched with love, hope and acceptance. My parents gave me the gift of strength to care for others, and my wish is to pass forward my values and passion to my children and grandchildren.”

"This adventure of my life would not have been possible without Marvin Cherrin, my husband of 55 years; my children, S.J and Adria Cherrin, Reneé and Craig Erlich, P.J. Cherrin and my dear grandchildren, Alec, Brendan and Natalie Cherrin and Jonah, Sophie and Molly Erlich. Thank you all for the gift of motherhood and the lessons you taught me. I would also like to acknowledge my beloved parents, brother and family in Sweden and Denmark, and my extended mishpacha and friends in the USA. The immeasurable joy and love I share with family and friends makes life worthwhile. I am so grateful for all of it and for each one of you. My heart is filled, my cup overflows with blessings. I love you with all with my heart and soul."   —March 2019