Detroit’s first Jewish cemetery is located inside of the 40-acre Elmwood Cemetery, first established in 1846.

In 1873, Temple Beth El, Michigan’s first Jewish congregation founded in 1850, purchased Section North F in the Woodmere Cemetery, located in the city of Detroit’s west edge, west of Woodward Ave., between Fort Street and Livernois. This was the second cemetery for the growing congregation. The first, a small half-acre of land located inside of the 40-acre Elmwood Cemetery, was not conducive to family burial plots or to the large mausoleums which the increasingly prosperous congregation wanted to build as their families' final resting places.

The congregation took great pride in this new park-like cemetery. The Woodmere Cemetery Association was formed on July 8, 1867 by a group of prominent Detroit business men who purchased approximately 250 acres to establish a rural cemetery for the city of Detroit. Construction began in 1868 and the cemetery was dedicated on July 14, 1869.  Shortly after its founding, in 1873, arrangements “were made with Woodmere Cemetery for the exclusive use of Section North F by Beth El members and their families." In 1915, Temple Beth El acquired another section for its use, which was dedicated on November 19, 1916. Some of the Jewish burials include: Albert Kahn’s brother, Moritz Kahn; Benjamin Siegel, founder of B. Siegel and Company; tobacco baron Sigmund Rothschild; and David E. Heineman and his parents Fanny (Butzel) and Emil Heineman.  Currently, there are over 190,000 interments at Woodmere. 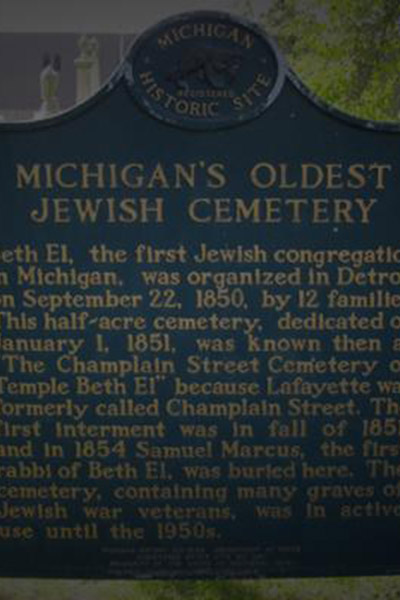